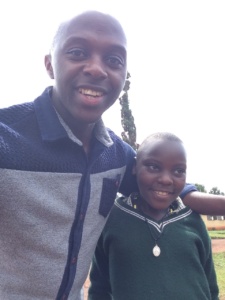 Joseph Balinda is the visionary and passionate Founder/President of The Balinda Children’s Foundation Canada, an organization focused solely on improving the lives of Uganda’s orphaned/vulnerable children. Joseph passionately believes it is the responsibility of every individual to help the disadvantaged and vulnerable populations in our communities.

Having grown up witnessing the devastating effects of HIV/AIDS in Kyarusozi Sub- County, Joseph founded The Balinda Children’s Foundation Canada as a compassionate response to the cry of Uganda’s millions of children orphaned by HIV/AIDS. Joseph knows the effects of HIV/AIDS first hand having lost a number of relatives to the disease and now cares for the children they left behind. Joseph, a husband and father of three daughters, was born and raised in Kyarusozi Sub-County, Kyenjojo District, graduated in Finance/Business Computing from Makerere University Business School, and holds a B.A in Criminology (Honours) from the University of Toronto, Canada. He now works with the Ministry of Justice and Solicitor General, Government of Alberta, Canada.

The organization was named after Joseph’s father, Andrew Balinda, a man who dedicated his life and resources towards helping the poor/vulnerable in his community.

Support us and change the course of a child's life today.

Consider Partnering with us today, your support will change a child’s life.